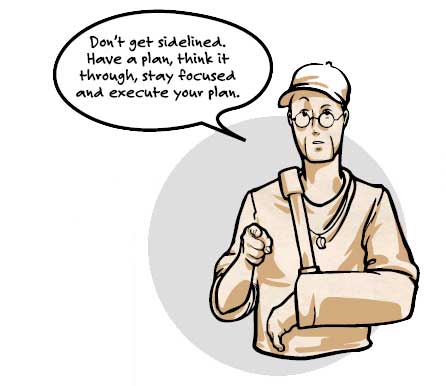 Congratulations! You might just have the right stuff to become a successful business owner.

Before you’re ready for Training Camp, however, you want to review some of the reasons why others either never made it into the game or were sidelined from the start. Some businesses fail for more than one reason, hence the fact that all these percentages add up to more than 100%.

1. SOLVING A PROBLEM THAT ISN’T THERE. According to research, this accounts for 42% of all failures. You fall in love with an idea so much that you lose perspective as to whether it’s actually needed or if there is a market for it.

2. NO FLOW OF DOUGH. It will take time to turn a profit. Approximately 30% of companies surveyed attributed a lack of cash as a determining factor in closing their business before it could ever hope to make money.

3. AN INCOMPLETE TEAM. Experts will tell you that you should invest in your team first, idea second. More than one business failed (actually 23%) because the founder was great at innovation but didn’t know a thing about sales or finances.

4. BEATEN TO THE PUNCH. You got a great idea but the competition beat you to market. Far better to create a market where none exists than to try to beat your competitors at their own game.

5. PRICING PROBLEMS. It’s the Goldilocks problem. Are you too high, too low or just right? Being on either side of the right price can take you out of the game.

6. THE PRODUCT SUCKS OR IS MIS-TIMED. A great idea poorly executed is a disaster in the making. Remember Microsoft’s answer to the iPod, the Zune? ‘Nough said!

7. LACK OF FOCUS. Some 17% of companies surveyed said they didn’t have a clear business model, which included not knowing how they would actually make money or get a return on their investment.

8. DIDN’T TELL ANYBODY. Remember that old adage about the tree not making a noise in the woods if there’s no one to hear it fall? Nearly 15% of companies surveyed found out the hard way that a product does not sell itself.

9. CUSTOMERS? SERVICE? Not listening to customers or listening to them too much tripped up another 14% of companies surveyed.

10. LOSING FOCUS, LACKING PASSION. Some companies didn’t lack focus; they simply lost it. This includes losing interest in your once great idea or trying to be too many things to too many people, pleasing none of them in the process.

12. TURNING ON A DIME. Knowing when you should cut and run or just run can be the difference between reaching the goal line and getting clipped along the way. Refusing to make changes or holding onto to the wrong vision for too long has brought more than one company to its knees.

13. POOR LOCATION. Nearly 10% of companies surveyed said that they were in the wrong part of the country or had too many team members working away from the main office. Selling snow shovels in Florida is probably not going to turn out well for you.

14. NO INVESTOR INTEREST. Bootstrapping is a noble way to start a business, but nearly 10% of companies said that they couldn’t attract investors, ending up all alone in the end zone with no one there to throw them game-winning ball.

15. LEGAL TUSSLES. Stepping into legal quicksand killed approximately 10% of those questioned. In all the excitement of starting a business, they forgot to dot their ‘i’s’ and cross their ‘t’s’.

16. BURNOUT. All work and no play was the cause of failure in 8% of respondents. The owners just couldn’t stand to face another day at work with no end and no rewards in sight.

3. Training Camp
- The Fundamentals
- Game Plans
- The Marketing Plan
- Naming The Team
- Home Or Away?
- The Right Formation

4. Playing Offense
- Getting In The Game
- "Banking" On It
- Reporting & Taxes

6. The Prevent Defense
- Finding The Right Coaches
- Rookie Mistakes
- Show Me The Money!
- Avoiding Penalties
- Insure Yourself
- Expect The Unexpected